RCSI is committed to embedding equality, diversity and inclusion across everything we do. Today, more than seventy countries are represented across RCSI's student population, continuing a proud tradition of welcoming students from around the world that can be traced back to the early years of the College through the RCSI Roll of Licentiates.

Once a graduate had completed their studies, passed exams, and received their licence, they were invited to enter their names in the RCSI Roll of Licentiates. From 1828, the Roll contains the full names as well as normal place of residence of all RCSI Licentiates. The vast majority of those early licentiates hailed from across Ireland, alongside a very small number of students from England, Scotland, and Wales.
The first international licenciate to appear in the Roll was a William Boxwell Thompson from Madras (Chennai), India, on 6 August 1830. Over the following decades, students began to flock to RCSI from around the world. Check out the map below for the first time students from various countries appear in the RCSI Roll of Licentiates:

Elizabeth Abimbola Awoliyi's signature in the RCSI Roll of Licentiates
Born in 1910, Dr Abimbola Awoliyi received her primary and secondary education in Lagos before travelling to Ireland to study medicine. On returning to Nigeria in 1938, Awoliyi went on to have an illustrious career at Massey Street Hospital in Lagos where she specialised in gynaecology. Built in 1914, the old Massey Children’s Hospital was transformed into a paediatrics hospital in 1961 and became the first General Outpatient Clinic and Referral Centre in the state, with the capacity to admit approximately 1,500 babies annually. At Massey Street, she served first as Junior Medical Officer before being promoted to Chief Consultant Gynaecologist and finally to Medical Director in 1960, a position she held until her retirement in 1969. 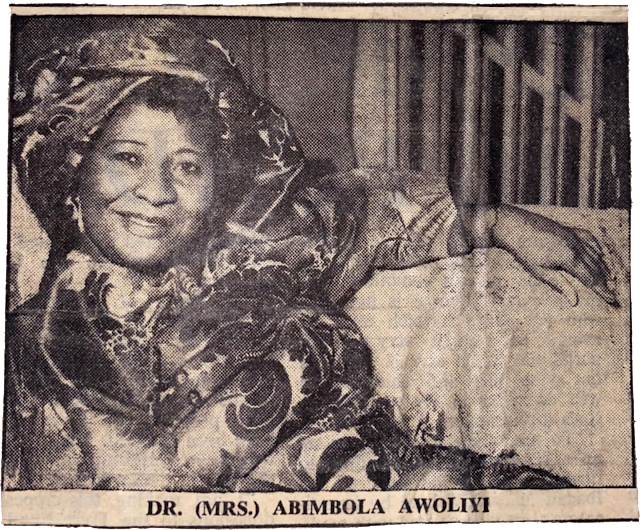 Awoliyi married fellow doctor and surgeon, Dr SO Awoliyi, in 1942. Together, they travelled to the United Kingdom in 1949 to embark on a period of further study. Over the next several years, Dr Abimbola Awoliyi studied midwifery and gynaecology at the Hammersmith Hospital and Lewisham Hospital in London. In 1955, she obtained a Diploma in Child's Health and was awarded MRCP (Member of the Royal College of Physicians). Awoliyi was subsequently awarded an MBE in 1958 for services to child welfare and was also appointed as a senior specialist gynaecologist and obstetrician by the Federal Ministry of Health in 1962.
A profile of Dr Awoliyi featured in the Daily Times Nigeria in 1959 praised her achievements in improving standards of healthcare for expectant mothers:
"Today, hundreds of mothers in Lagos and the improved birth rate which places Lagos ahead of the rest of the country owe much to Dr Abimbola Awoliyi."
Awoliyi was the pioneer president of the Lagos branch of the National Council of Women's Societies (NCWS), an NGO advocating for women's welfare issues in Nigeria. She was a member of the national committee of the organisation and was appointed President of NCWS in 1964. Awoliyi also acted as a consultant to the organization's family planning clinic which later became the Planned Parenthood Federation of Nigeria. Elizabeth Abimbola Awoliyi died in 1971 at the age of 61.